The human ovary consists of an inner medulla and outer cortex with indistinct boundaries. The medulla contains the blood vessels and nerves, while the cortex is occupied by developing follicles. A cross-section of an ovary will reveal follicles in various stages of development. The next sections will describe the histological features of each stage of follicular development and the major functional changes in the cells compose follicles. 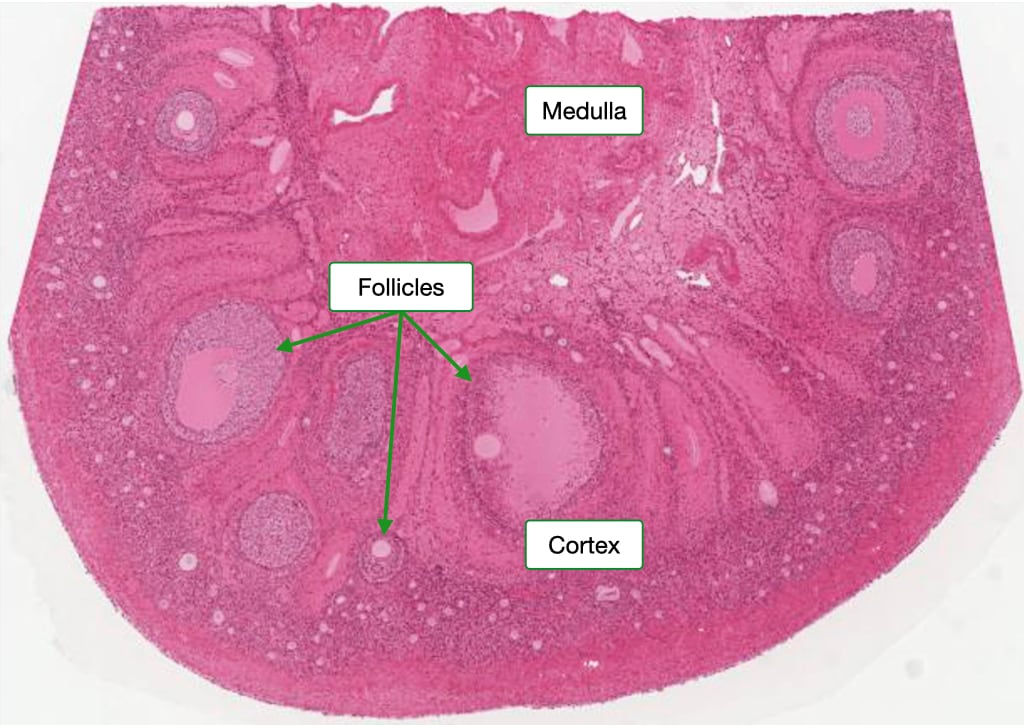 An ovarian follicle progresses through several distinct phases before it releases its ovum. During the first five months of development, a finite number of primordial follicles form in the fetal ovary. These follicles consist of oocytes surrounded by a single layer of squamous follicular cells. These primordial follicles remain in the process of the first meiotic division. At puberty, they begin to develop further and become primary follicles. 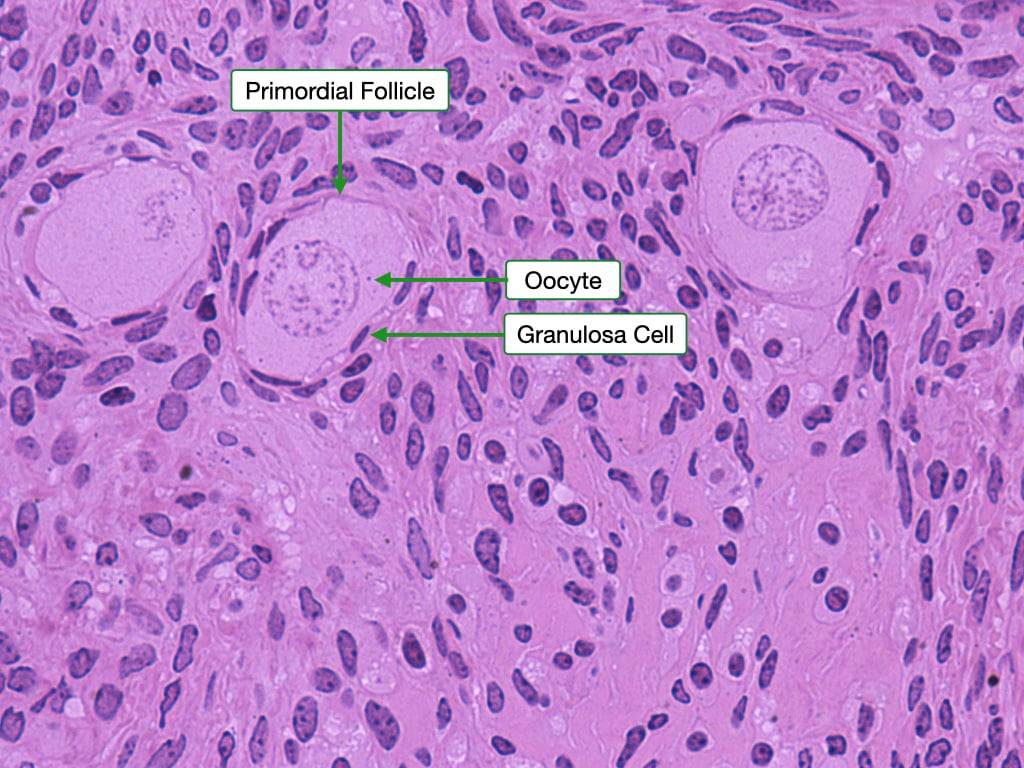 At the start of each menstrual cycle a limited number of primordial follicles are triggered to develop. The first apparent histological stage is the early primary follicle that consists of a central oocyte surrounded by a single layer of follicular cells which have become cuboidal. These cells are stimulated by follicle-stimulating hormone (FSH). 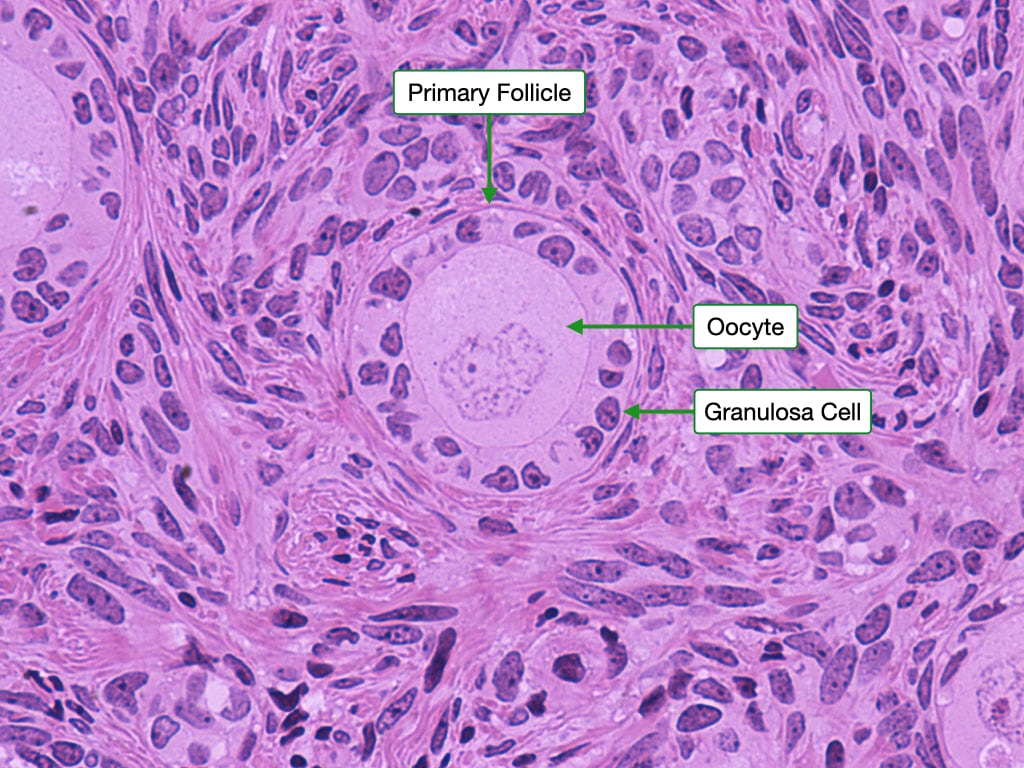 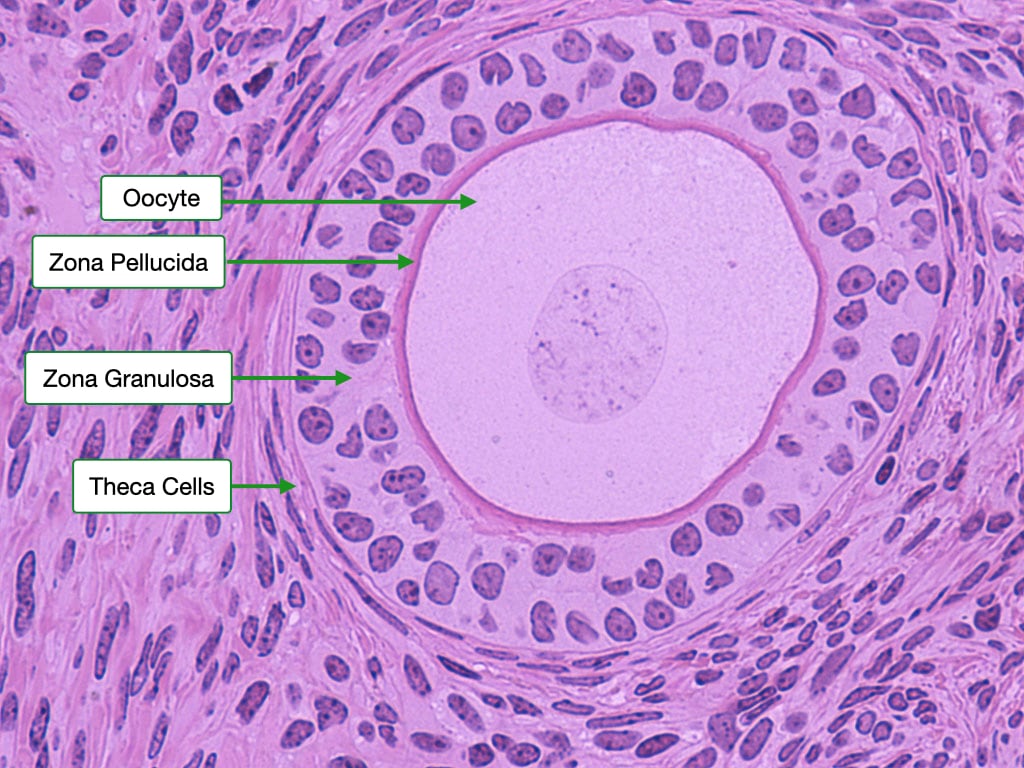 The characteristic feature that distinguishes secondary from primary follicles is the appearance of a follicular antrum within the granulosa layer. The antrum contains fluid which is rich in hyaluronan and proteoglycans. Note the increase in cell layers of the zone granulosa, the thicker zone pellucida, and larger oocyte. At this stage, a layer of cells outside the follicle become evident. These cells compose the theca interna and contribute to the production of estrogens.

The production of estrogen requires both the cells of the theca interna and granulosa cells. Estrogens, like all steroid hormones, are produced from cholesterol through a multi-step process that requires several different enzymes. Neither the cells of the theca interna nor the granulosa cells contain all of the enzymes necessary to convert cholesterol into estrogens. Theca cells contain enzymes that catalyze the initial conversion of cholesterol into androgens but lack aromatase that carries out the final steps of converting androgens into estrogens. Consequently, androgens produced by theca cells diffuse into the granulosa cells which contain aromatase but lack the enzymes for the initial steps in estrogen synthesis. The theca cells are in a better position to catalyze the initial steps in estrogen synthesis because they are closer to blood vessels and can take up LDL to obtain cholesterol. 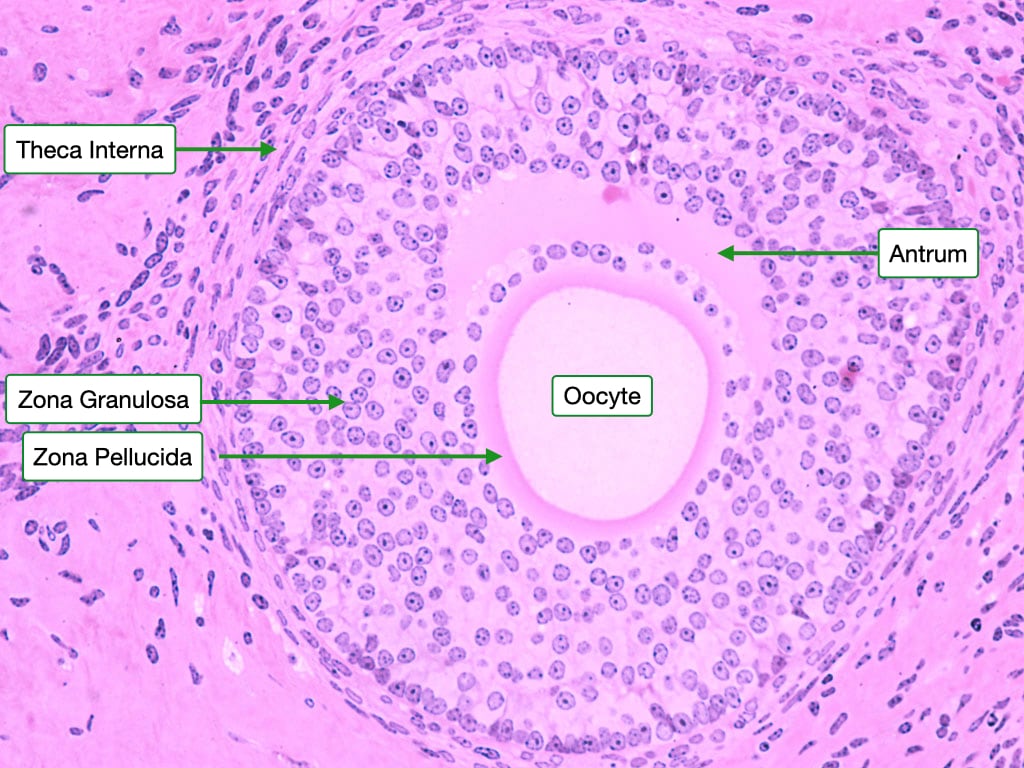 The Graafian follicle is the stage after the first meiotic division has completed but before ovulation. The oocyte is now a 2N haploid. The follicle is characterized by a large follicular antrum that makes up most of the follicle. The secondary oocyte, having undergone the first meiotic division, is located eccentrically. It is surrounded by the zona pellucida and a layer of several cells known as the corona radiata. When released from the Graafian follicle and into the oviduct, the ovum will consist of three structures: oocyte, zona pellucida and corona radiata. 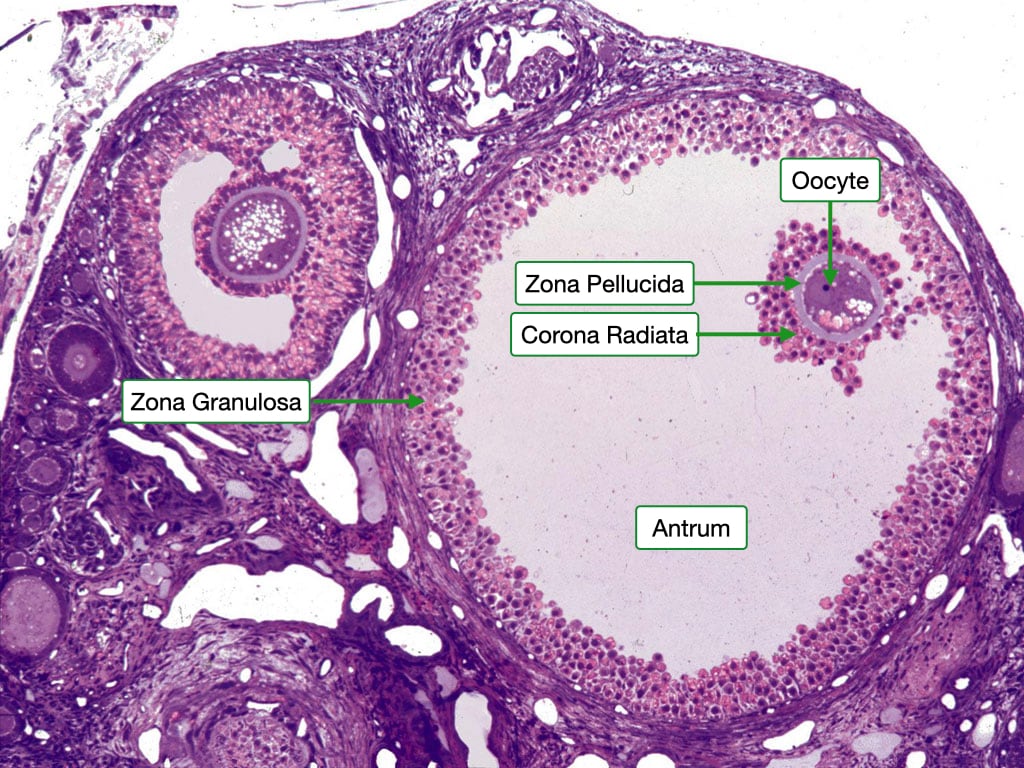 After release of the ovum, the remaining cells of the granulosa and theca interna form the corpus luteum. The center contains the remains of the blood clot that formed after ovulation. Surrounding the clot are glanulosa lutein cells and on the outside theca lutein cells. These cells produce progesterone and to a lesser extent estrogen. 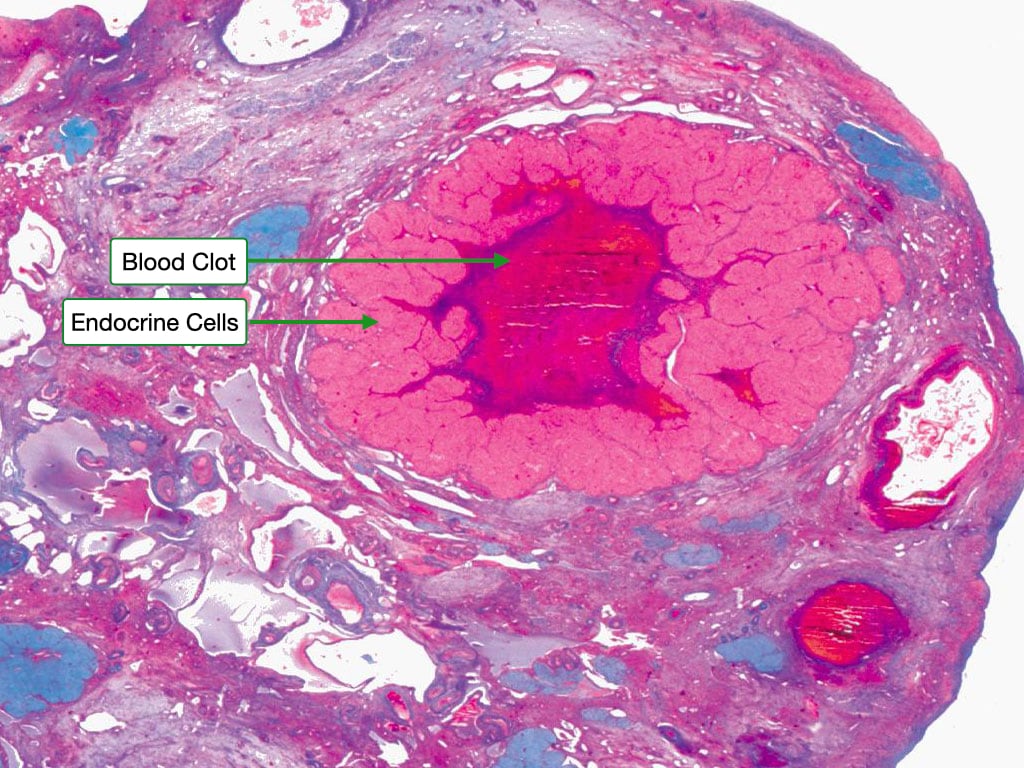 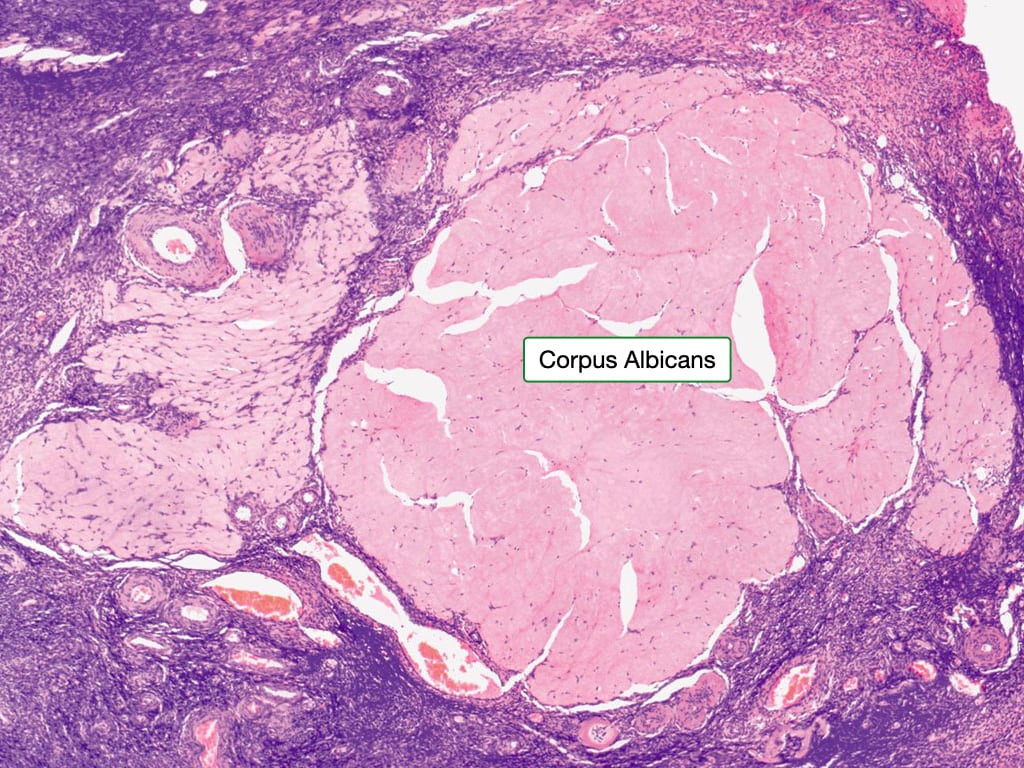 Each menstrual cycle, several primordial follicles are stimulated to continue development but only one follicle completes development to release an ovum. The other follicles degenerate through a process called atresia which can occur at any stage of development. During atresia, granulosa cells undergo apoptosis and are replaced by fibrous material. The oocyte degenerates and the basement that separated the oocyte from granulosa cells thickens to become the glassy membrane. The decrease in FSH levels trigger atresia in all but the one dominant follicle. 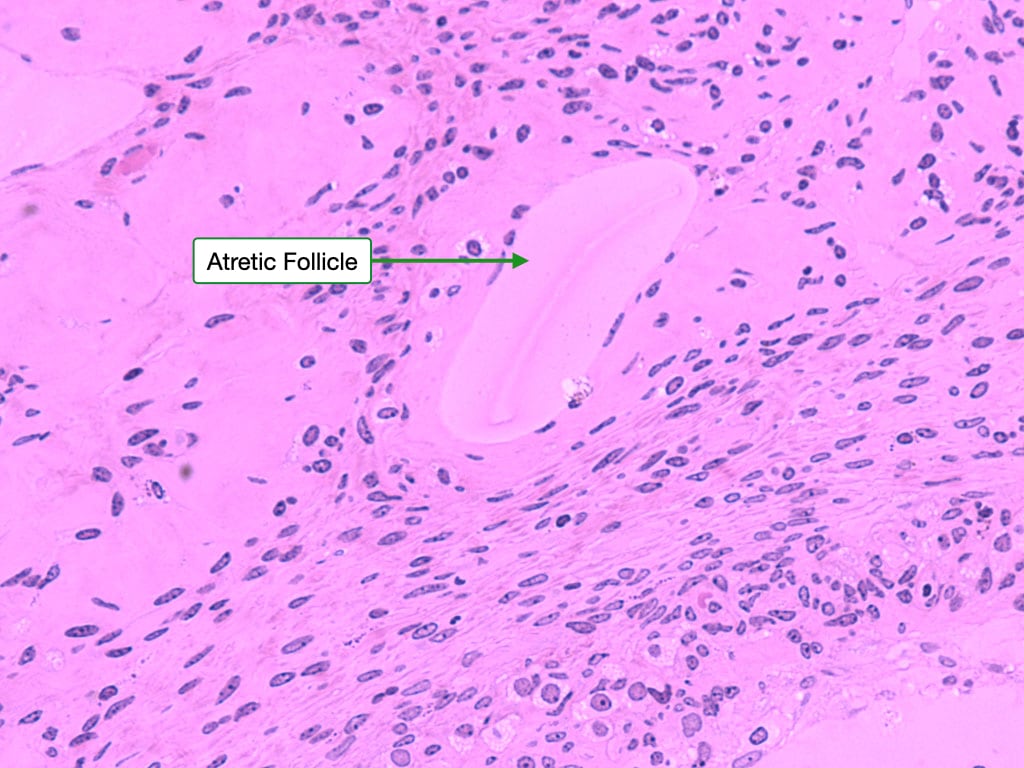 After release from the ovary, the ovum enters the oviduct. The oviduct consists of several segments: the infundibulum, which lies closest to the ovary, followed by the ampulla, the isthmus, and the pars interstitialis. The first two of these regions have a characteristic appearance that is dominated by an elaborate mucosa that is thrown into numerous branched folds, surrounded by a relatively thin layer of smooth muscle. As the tube moves away from the ovary and toward the uterus, these folds become smaller and the smooth muscle dominates. 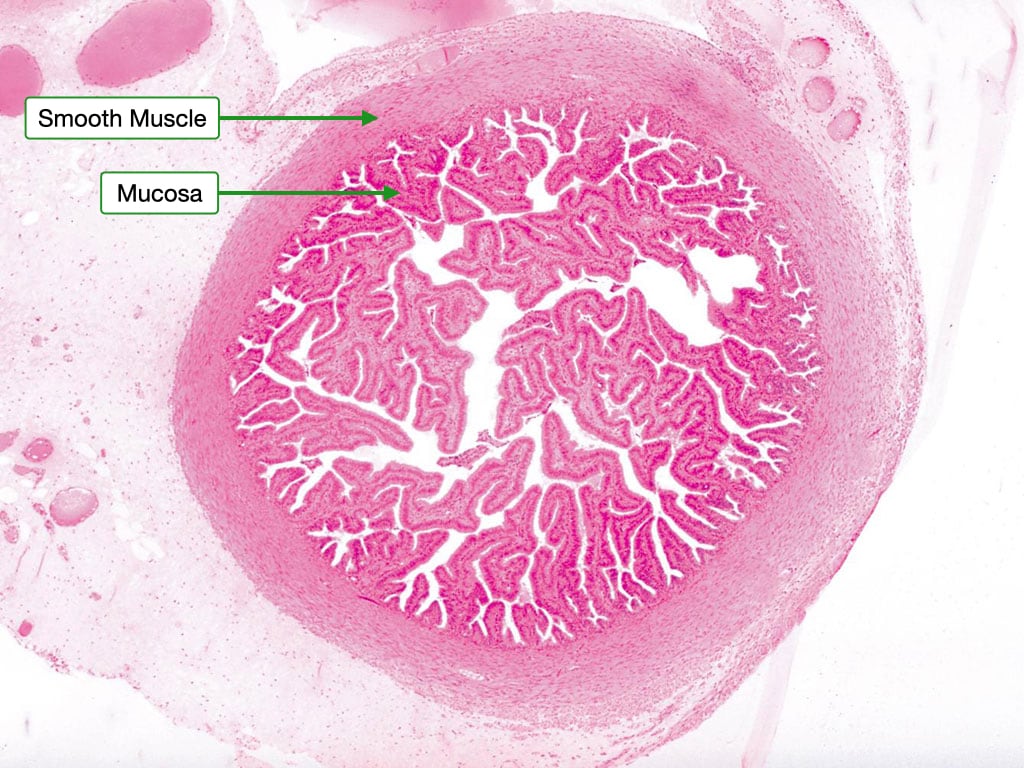 The oviduct epithelium consists of two distinct cell types. The ciliated cells dominate and serve to move the ovum away from the ovary and toward the uterus. The non-ciliated secretory cells, also known as peg cells, release a secretion that lubricates the tube and provides nourishment and protection to the traveling ovum. 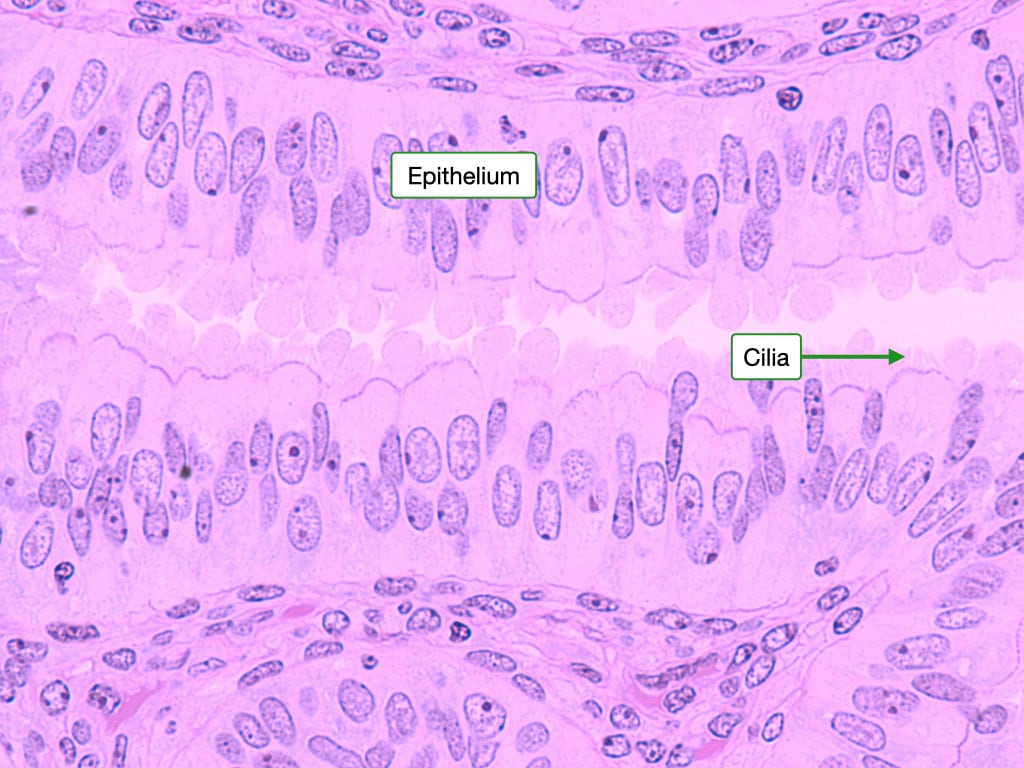 The uterus is divided into several layers that have distinct structural and functional characteristics. The simplest classification of these layers is their division into a mucosal layer, or endometrium, a muscularis layer, or myometrium, and a serosal layer, or perimetrium. The endometrium itself is divided into two layers, the stratum functionalis and stratum basalis. During the menstrual cycle, the stratum functionalis expands and vascularizes and is subsequently sloughed off during the process of menstruation, whereas the stratum basalis remains relatively constant. The myometrium allows for the expansion and contraction of the uterine cavity and is responsive to the hormone oxytocin. 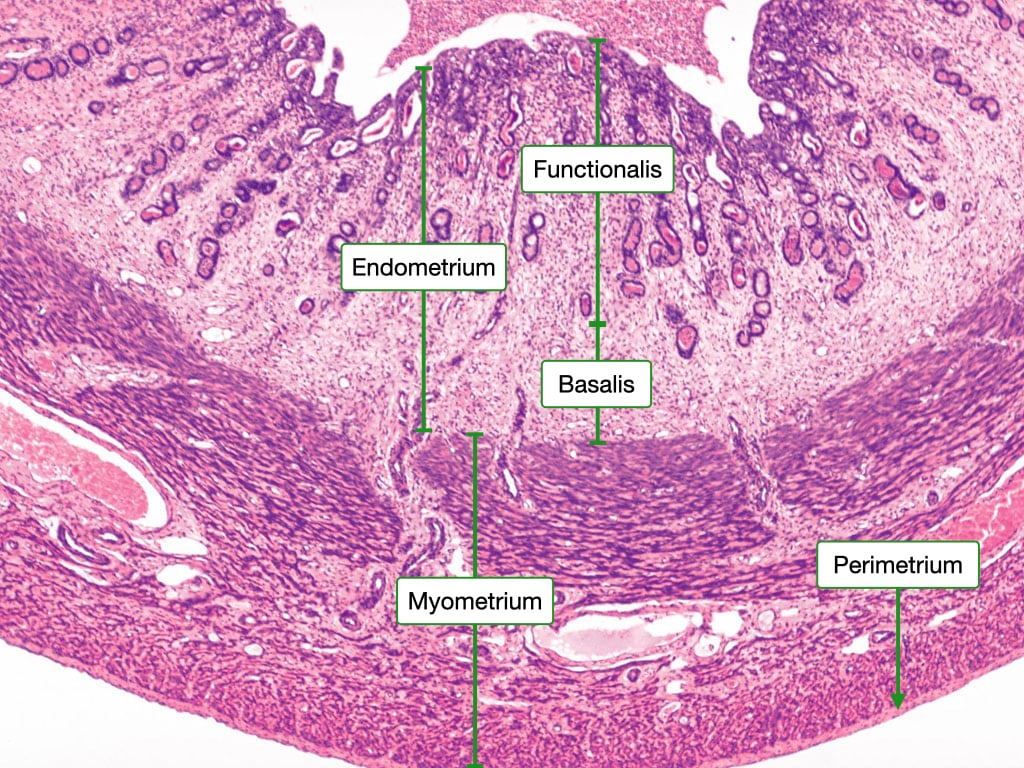 The endometrium undergoes dramatic structural and functional changes during the menstrual cycle. These changes are divided into two phases: proliferative and secretory.

The proliferative phase is characterized by robust growth of the epithelial cells in the stratum functionalis and the formation of coiled and densely packed glands. This changes in this phase are driven by estrogen. 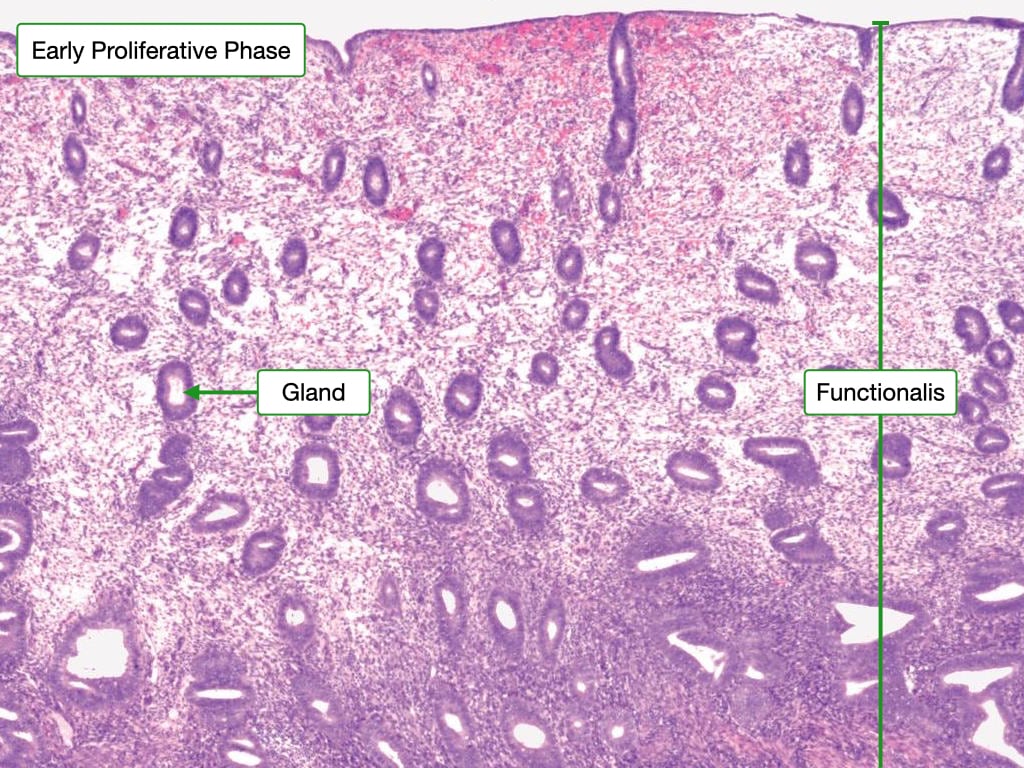 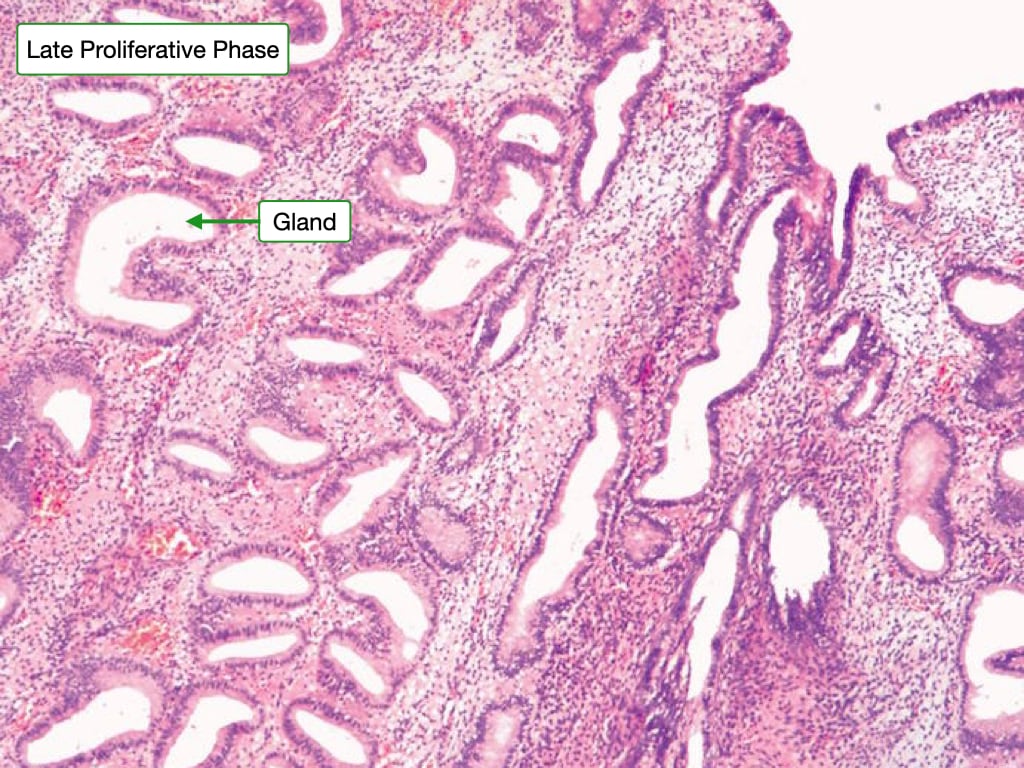 The secretory phase of the uterine cycle begins at ovulation. In this phase, the glands become even more complexly coiled and the endometrial lining reaches its maximal thickness, whereas the stratum basalis and myometrium remain relatively unchanged. Note the saw-toothed appearance of the glands. Secretions rich in glycogen and glycoprotein can be observed in the lumina of the glands. This phase is drive by progesterone. 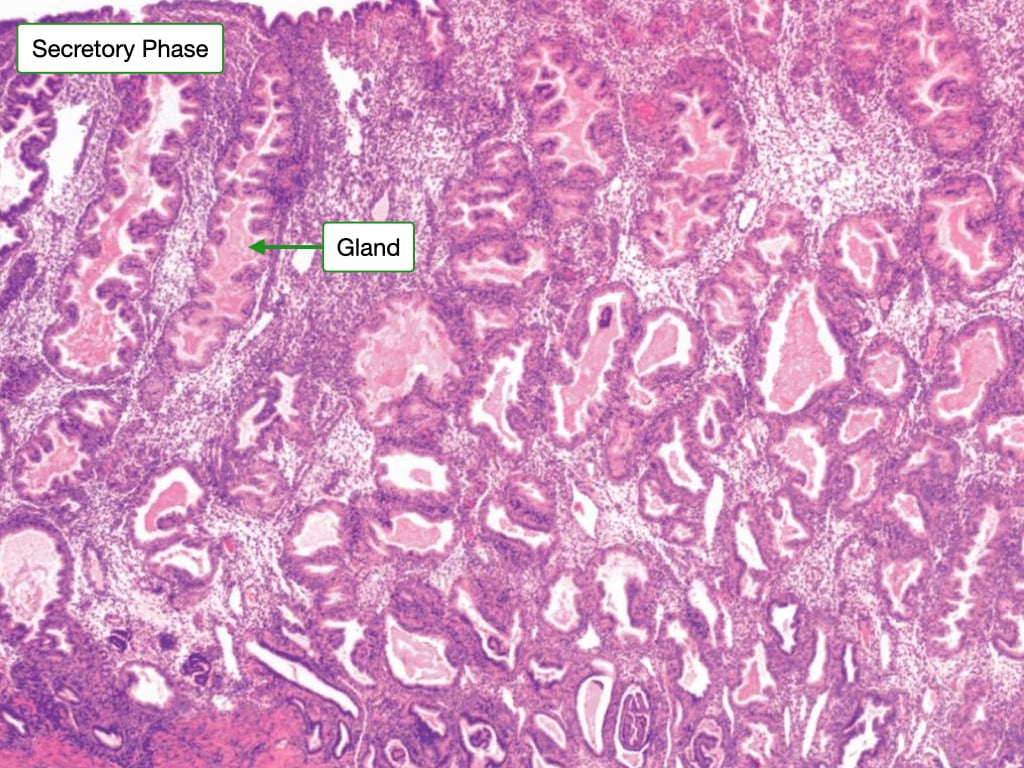 If fertilization does not occur, the placental tissue does not produce hCG and the corpus luteum in the ovary degenerates. Consequently, the levels of progesterone decrease, causing the spiral arteries in the endometrium to constrict and the tissue to become ischemic. This leads to cell death and the sloughing of the stratum functionalis. 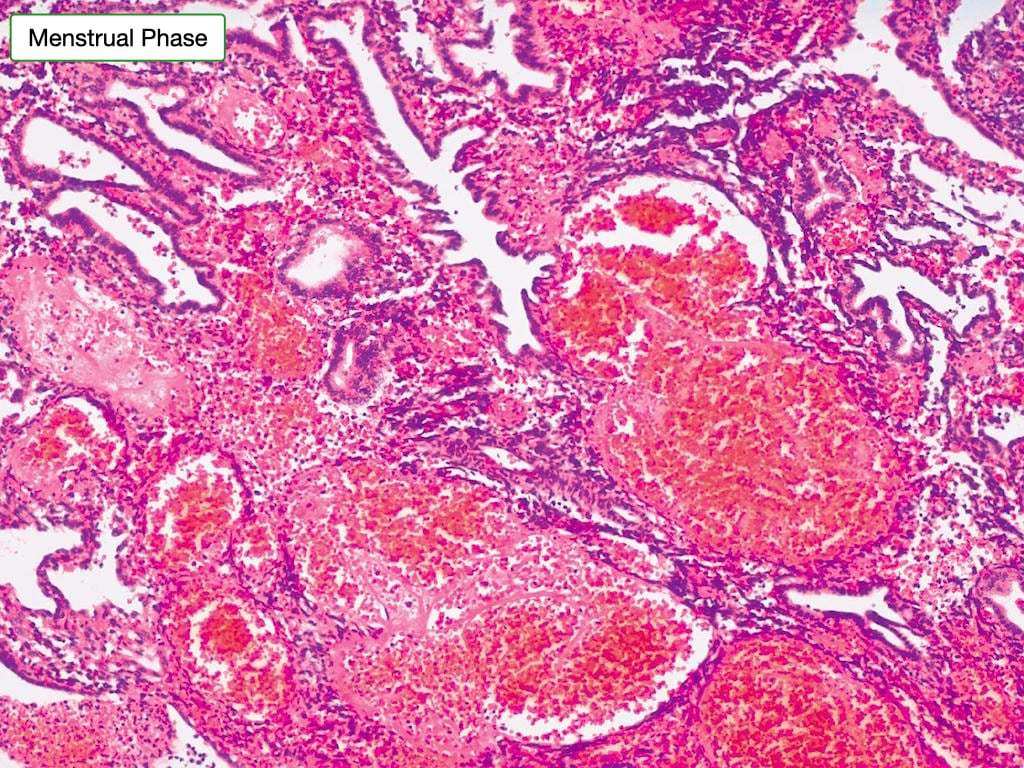 The cervix lies at the base of the uterus and serves to protect it from bacterial infiltration. It is the site of an important epithelial transition. The upper cervix (endocervix) is lined by a simple columnar epithelium that contains mucous-secreting cells. In contrast, the lower cervix (ectocervix) is lined by a stratified squamous epithelium. The transition point between these two epithelia is known as the external os. Note how the underlying layers of the cervix are composed primarily of collagenous and elastic connective tissue rather than smooth muscle fibers. 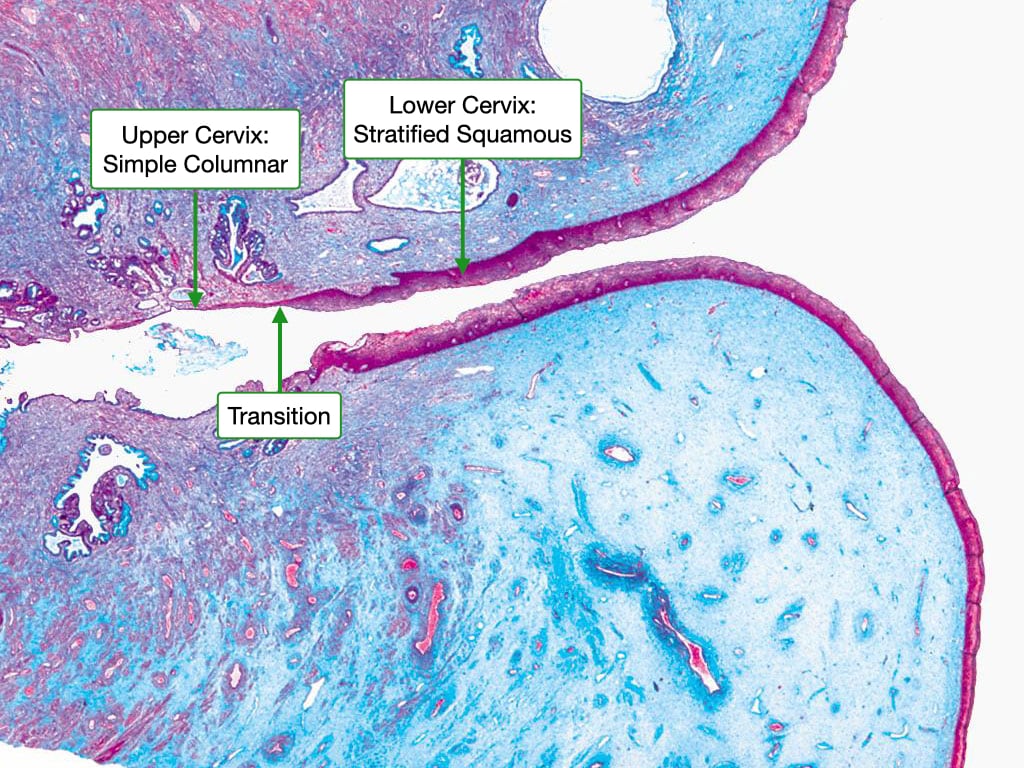 The vagina is lined by a stratified squamous epithelium that features a small degree of keratinization. Below the epithelium is a thick layer of dense connective tissue, like that in the dermis of the skin. A layer of loose connective tissue containing many blood vessels and nerves follows this. The cells of the vaginal wall typically contain a relatively large amount of cytoplasm because they store and release glycogen. Glycogen is metabolized by commensal bacteria to lactic acid that prevents growth of pathogenic microorganisms. 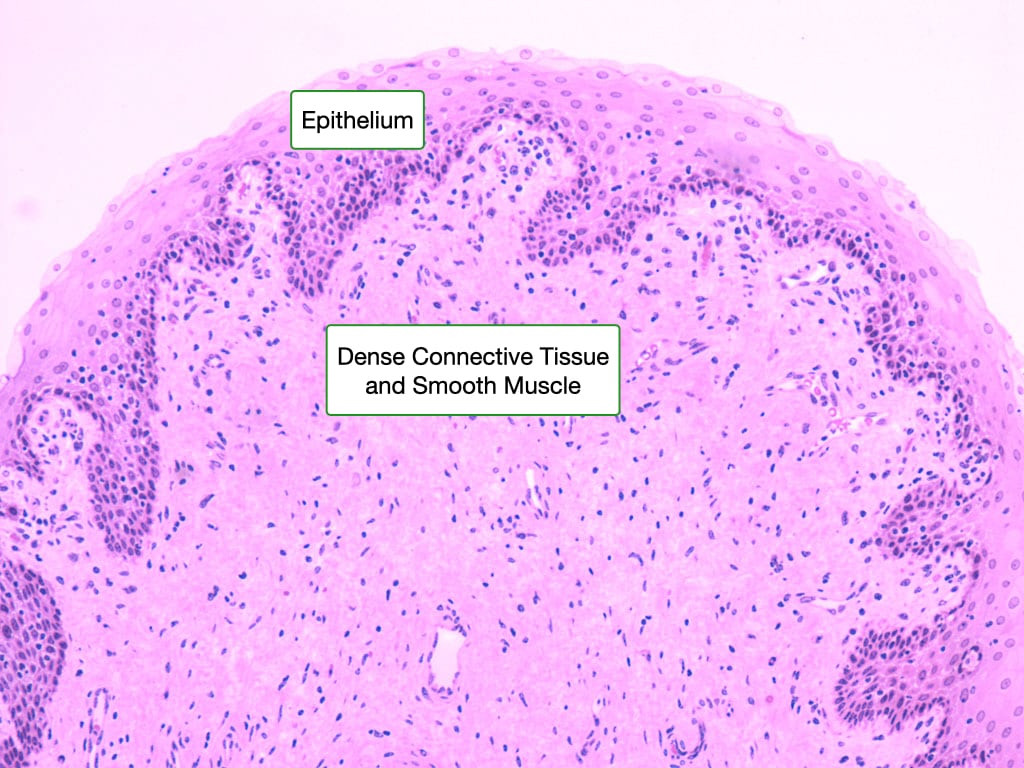